Our trip to the Virginia Safari Park from the Fenton Inn. 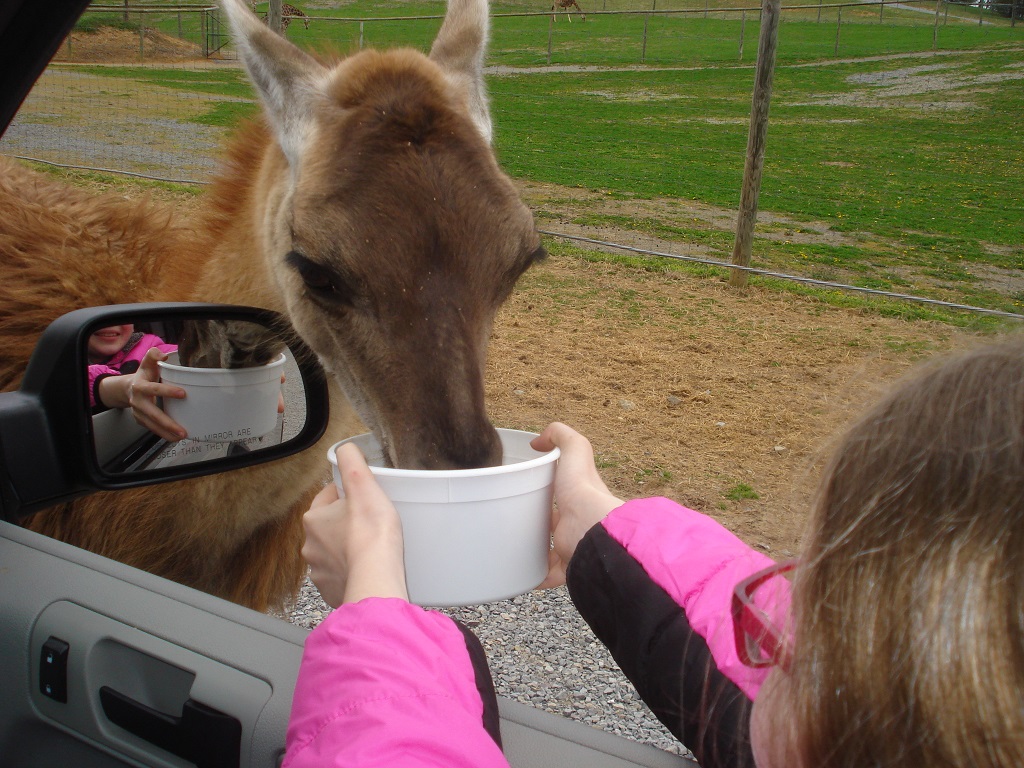 Just an hour drive through some back country road, is the town of Natural Bridge.  Aside from the Natural Bridge, the town has a few road side relics that might have seen better times.  The Safari Park is the exception to this, as a newly build and animal friendly drive- thru experience.  They do have a small zoo area with the tigers and a few other animals you probably would not want to feed from your car, but most of the park is devoted to the friendlier herd animals that roam around in series of large pastures and woodlands.  Above is an Alpaca, a member of the “Llama mafia” that greets each car as it crosses into  park.  One will stop the car by standing in front of you, while the others look you in the eyes to see who will be the most generous with the food bucket. 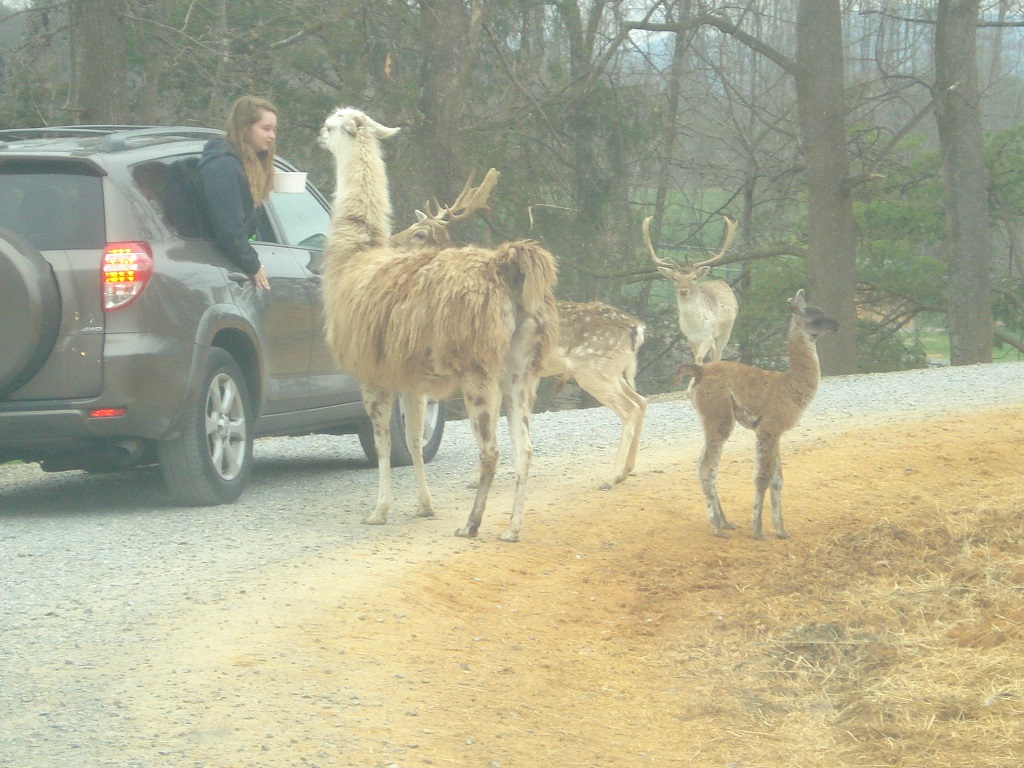 A Llama mama with a young one learning the proper way to get attention.  Beyond are Fallow deer from India. 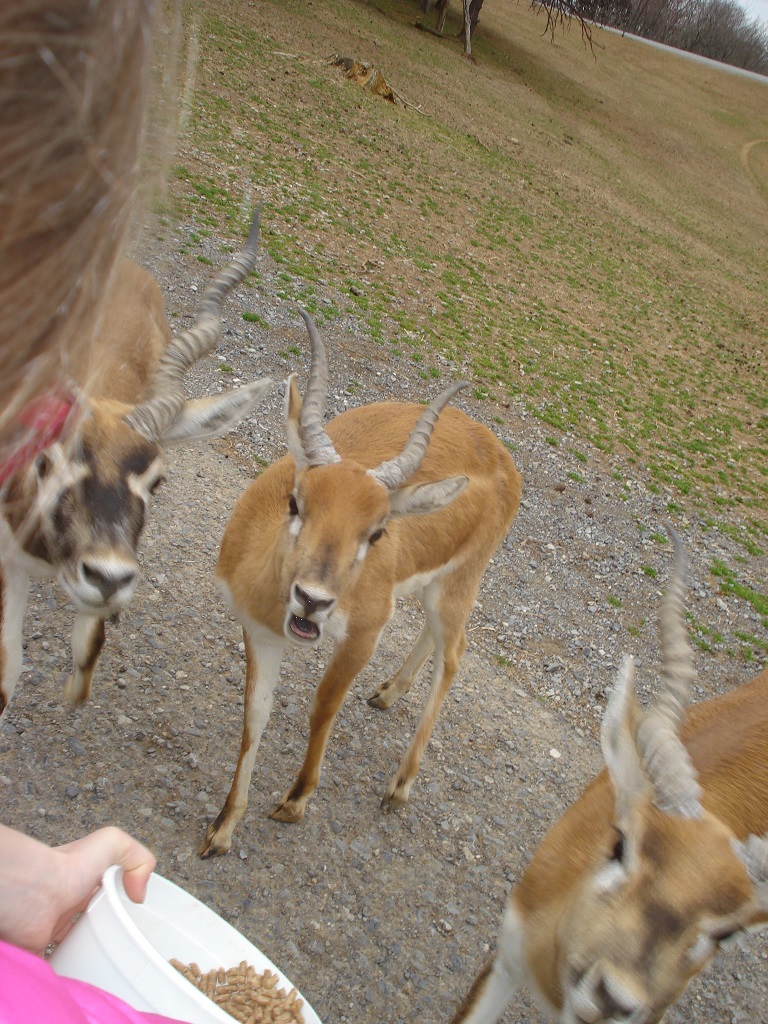 A few Black Buck Antelope with their spiraled horns.  Deer, elk and moose have antlers, that are shed each year and regrow. The antelope, Ibex, cattle and goats have horns that are kept year round and grow longer with age. 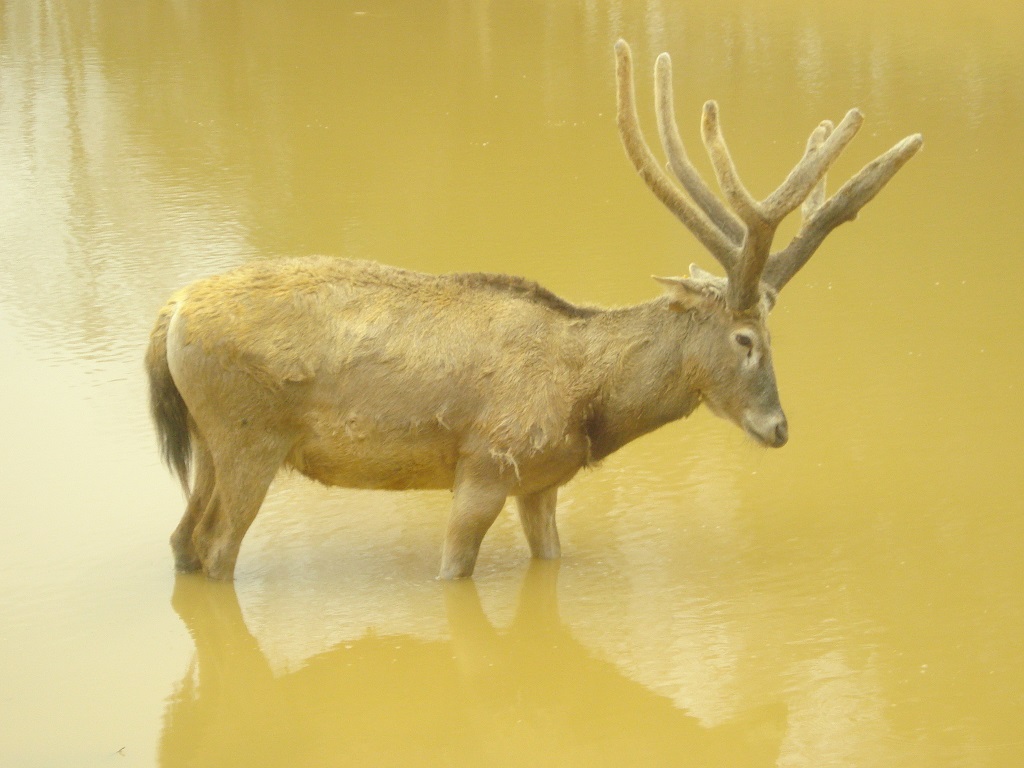 I think this is a Pierre David Deer, although with so many types, it might be some other deer, so to be certain we can call him Bob.  As this is the spring time, Bob’s antlers are covered in velvet while they grow. 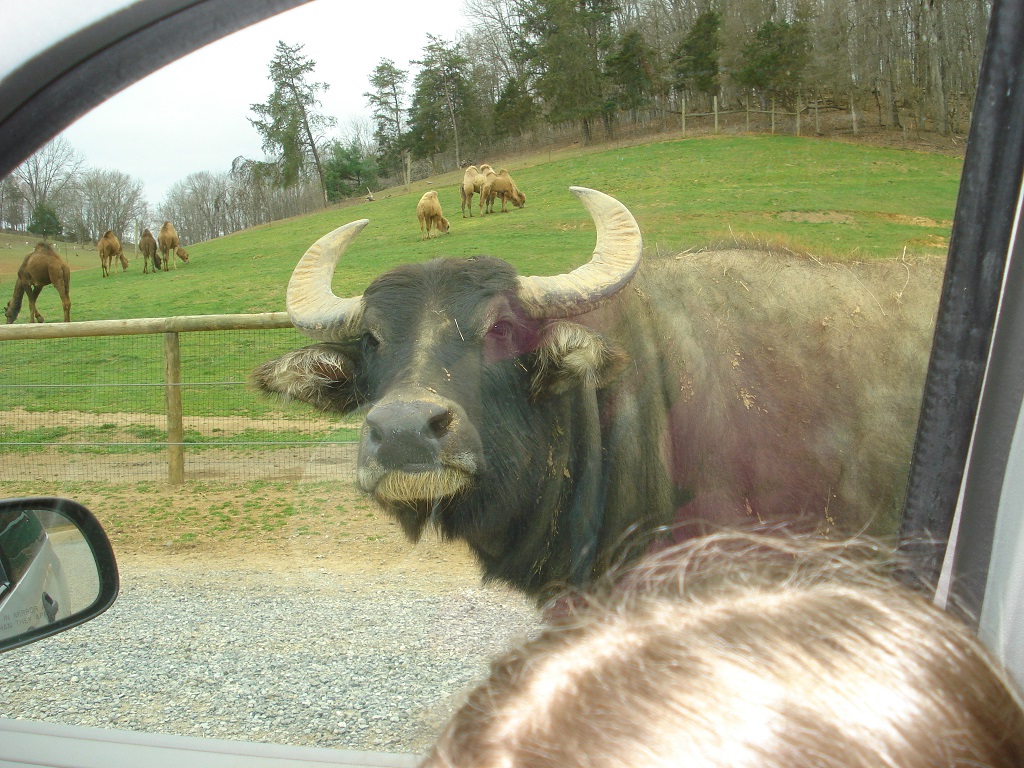 A Water Buffalo from Asia.  The camels are now kept in a separate pen from the feeding area, as they stole buckets and would spit on the cars.  It was a bit amusing but not the best car wash. 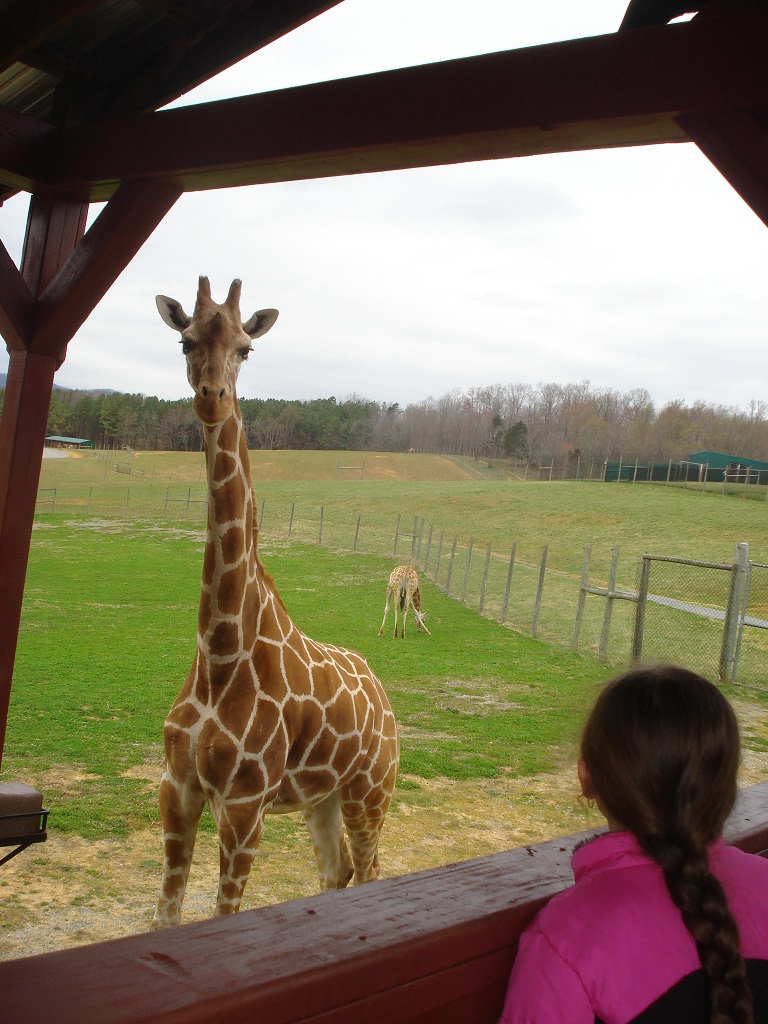 The giraffe have their own feeding station, as they eat special food from a coin operated gumball machine.  We were with out any quarters and they seemed to sense this lack of currency and wandered off to graze. 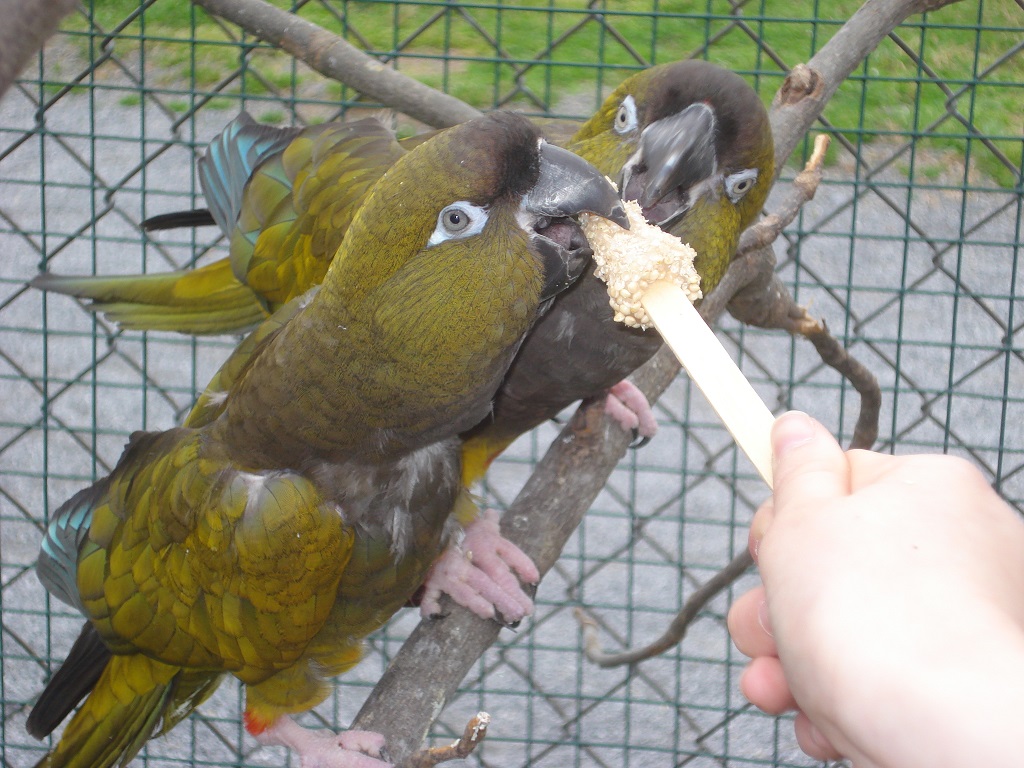 We did get bird feeding sticks, and as it was a low crowded day, the birds were still interested in food that day.  We were circled by a large flock of multicolored budgies as they decided one side of the enclosure was better that the other.  Then some trend setter would fly off, and they would all go again to new spot. 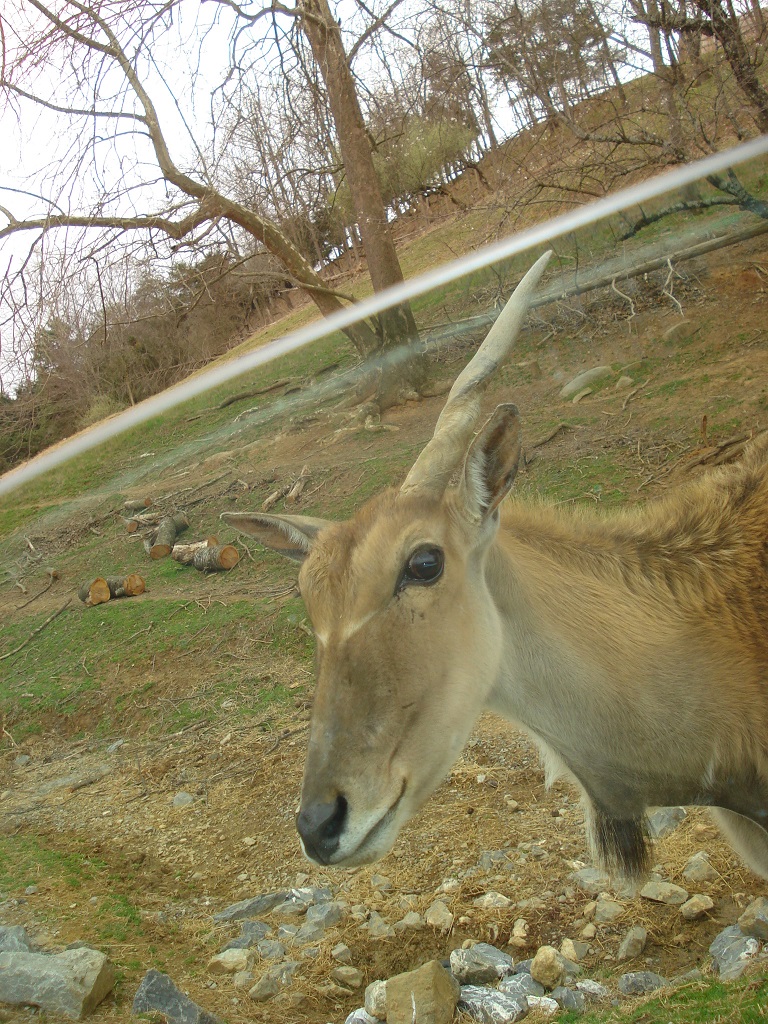 Not quite a unicorn was looking for any last food in our buckets.    The Llama mafia had gotten a big share before they would let us drive out of their territory, so we ended up running out about midway.  Of course they have feeding stations with the same food as we had in our bucket, but perhaps the whole interaction makes the feeding more fun for them as well.  The bucket is always fuller on the other side of the car.