Our day exploring the Frontier Culture Museum in Staunton. 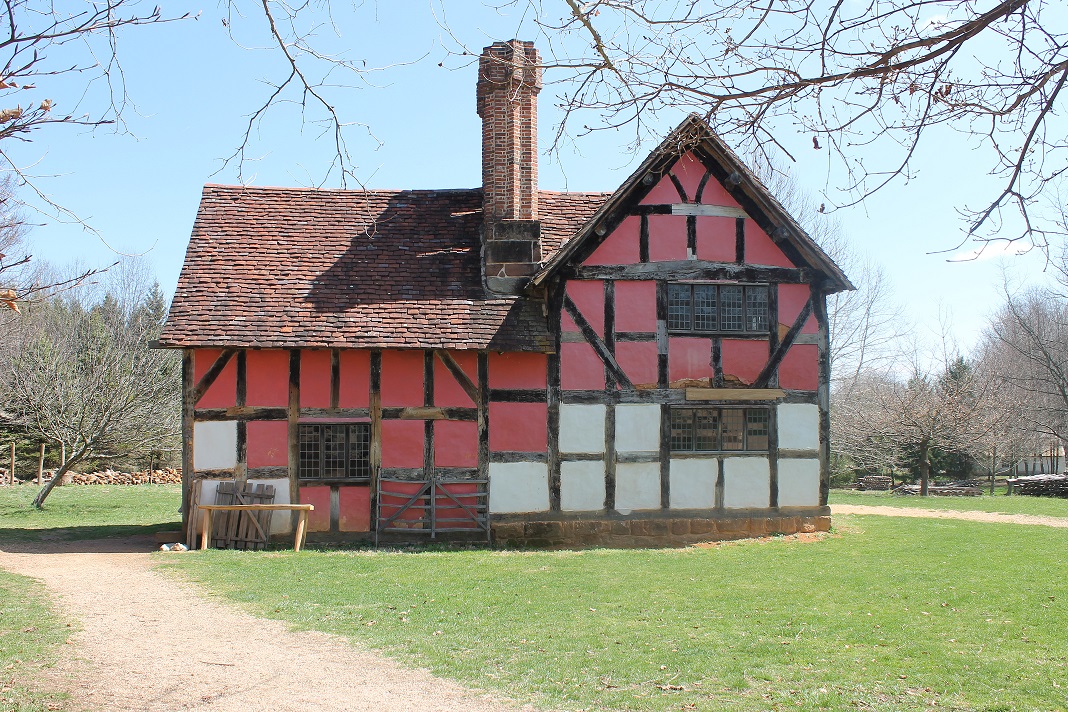 A scenic half hour drive from the Fenton Inn is the quaint town of Staunton.  Tourists like to pronounce the U, but locals seemed to have dropped it to be called “Stan-ton” and are just as sure that way is correct.  Either way, the town has a few good restaurants and one of our favorite museums, The Frontier Culture Museum.  They have taken old houses from where the Shenandoah valley people came from, to show how the melting pot of architectural ideas made our American styles.  The museum has representation from Africa, England, Ireland, Germany and Native American and finally some American farms from the area.  Above is the English farm.  In England, as in much of Europe, social mobility was nearly impossible.  Most families were renting land they farmed, where as in America they would own their land and have the ability to keep their profits from the farm. 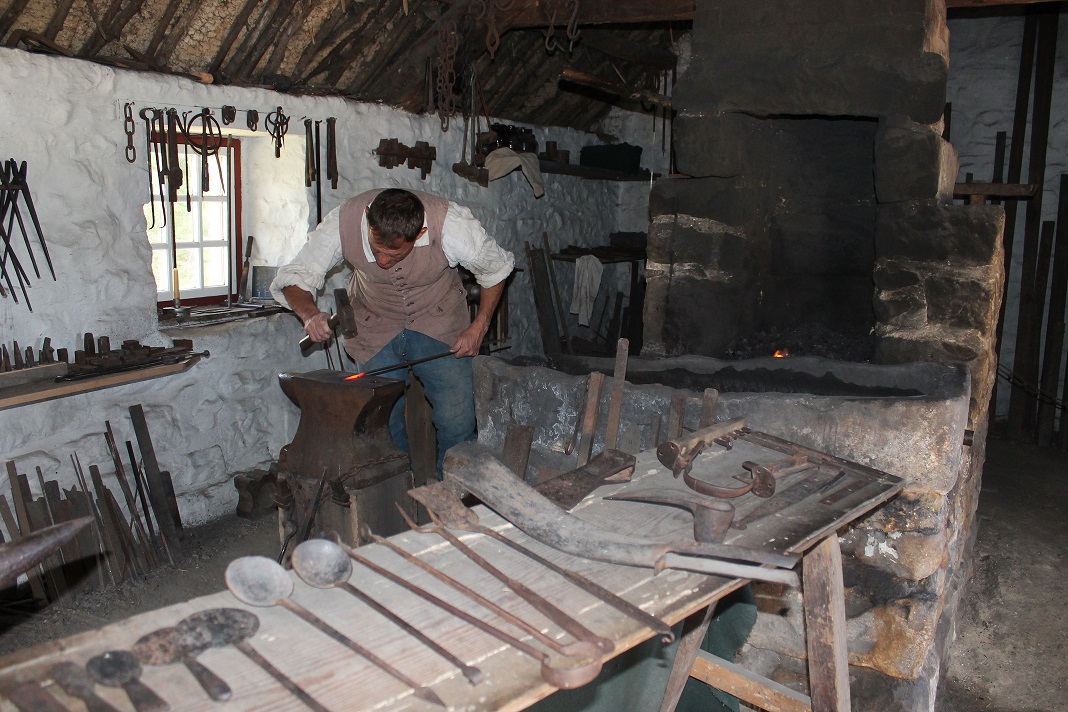 The blacksmith shop in Ireland.  Before the industrial revolution took hold, tools, hinges and nails were made locally by the village blacksmith.  Old metal objects could be reheated and formed into new tools over and over.  It was in little shops like these where the ideas for new plows and farming tools would help to start the agricultural revolution.  This boom in food production and labor saving farming would result in the massive migrations from rural farming villages through out Europe, to rapidly growing cities and to the Americas. 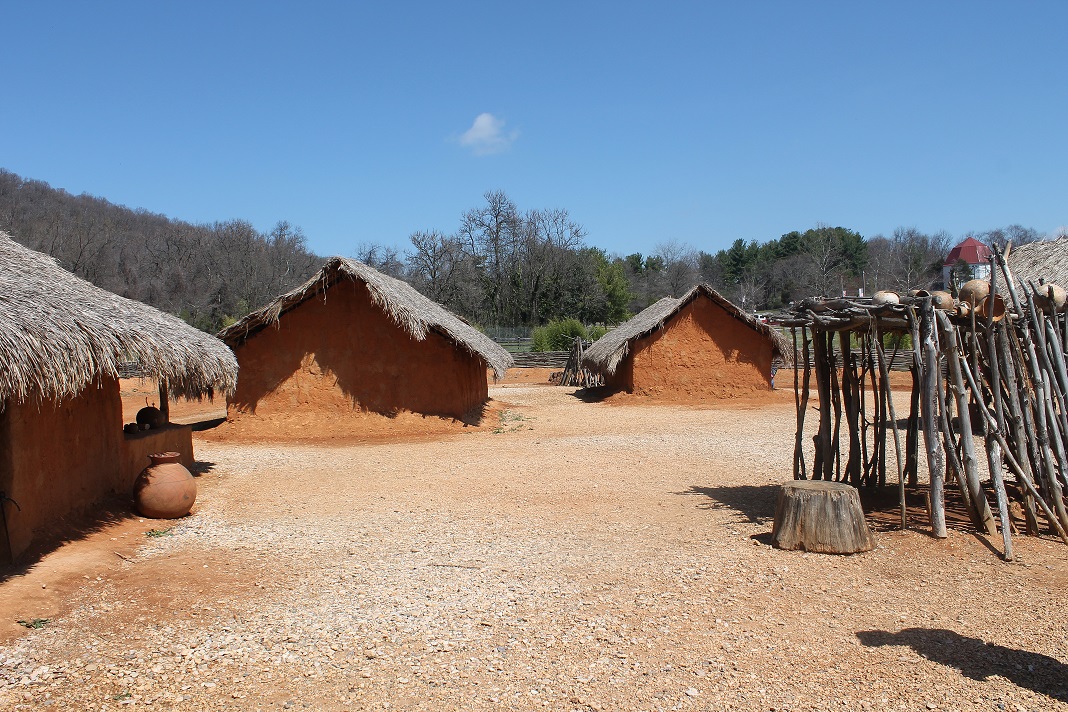 An African farm from central Nigeria.  What looks like a village would actually be one extended family.  They would raise goats and grow yams as their primary food source.  This region of Africa, home of the Ibo tribes, was the primary location for most slaves in Virginia.  While we tend to think historically of large plantations in the South, most farms in the central Virginia region were much smaller and had 3-4 slaves on average. 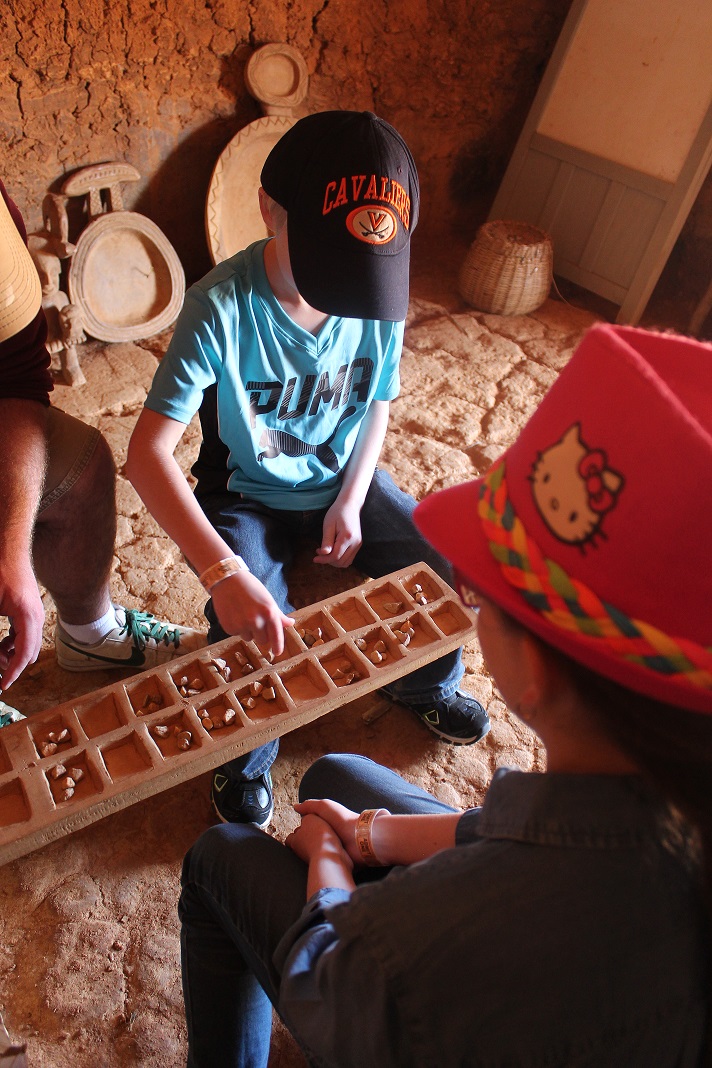 Playing an African game.  The goal is to get more stones as you move them around the board and keep the one stone from each end.  I am sure there is a bit more probabilities to figure to know where best to start each turn,  because like chess there are no random dice in the game. 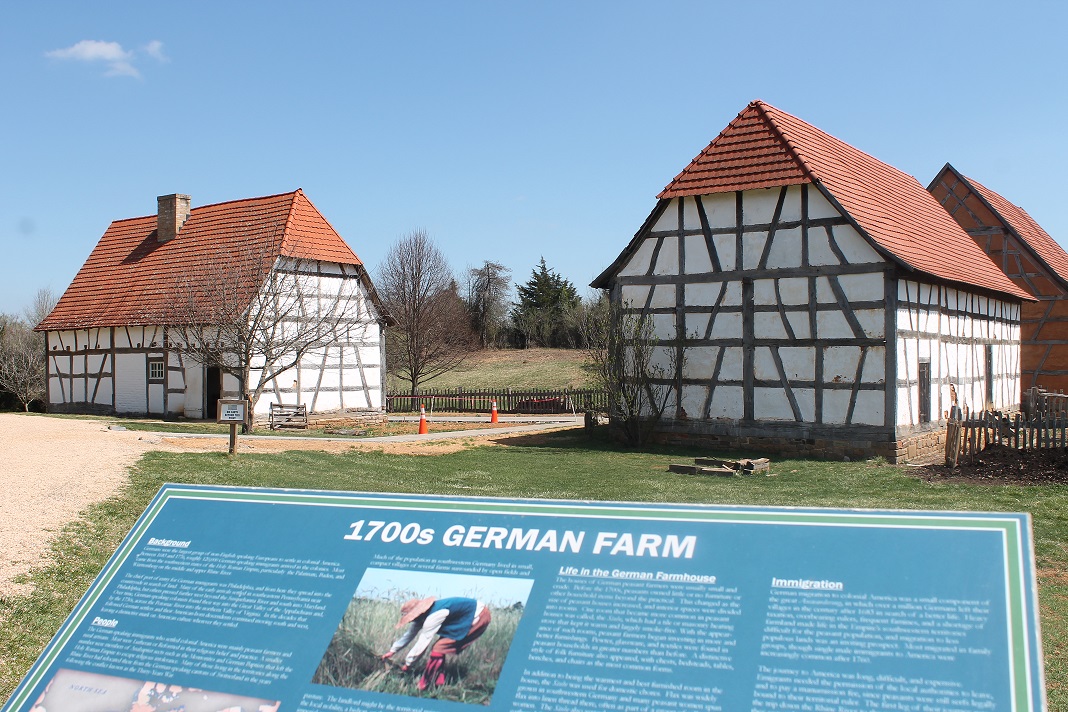 The German farm from the early 1700s.  Having built our own Bavarian Village, we are a quite partial to this one.  Wood was a bit more scarce in much of Germany at the time, and so they used some trees to timber frame that most Americans would  not even bother to cut into firewood.  I really like the almost cartoon effect of the wavy and curved timbers.  I tried to reflect a little of that in our Village at the Fenton Inn, particularly on the Wilhelm’s House.   Just as the Germans used what ever wood they could get, we made use of some rather curved trees from our property.  It was not due to a wood shortage, but rather to honor the trees that stood here by making full use of even the quirkiest of logs.  In a world of factory made objects, these custom curved boards and timbers seem to really make people smile.  As I say about wood and people, it is the flaws that make them interesting. 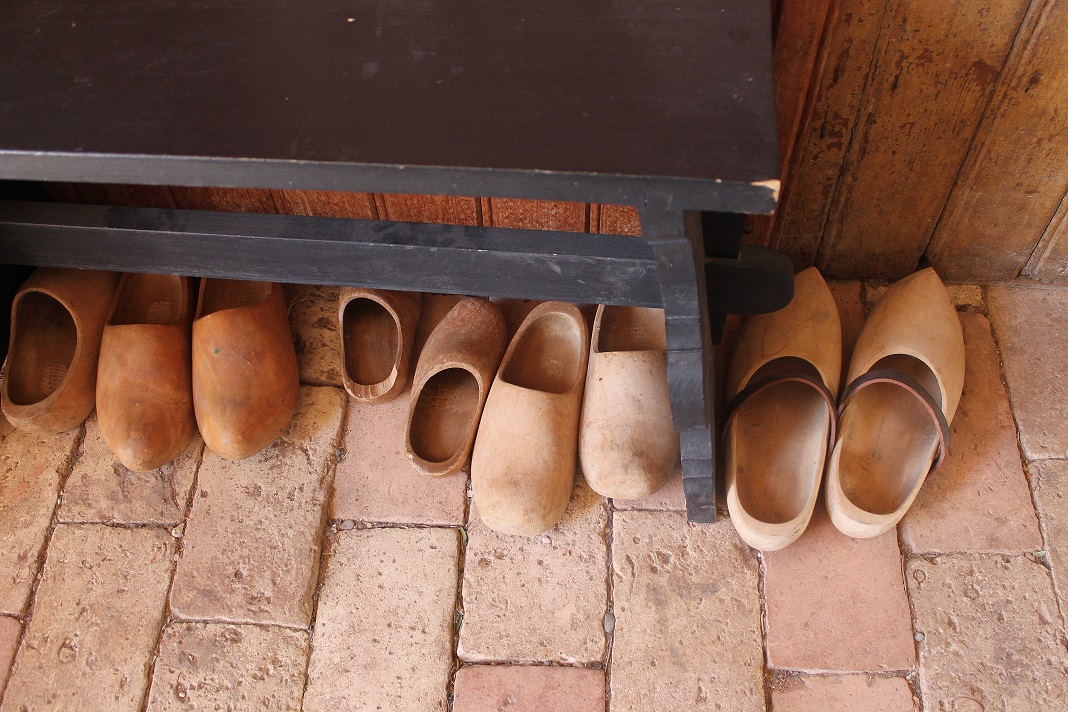 Wooden shoes in the German house.  Long before people wore a bathrobe and pink Crocks to go out to the mail box, the wooden shoes were all the fashion.  Somehow the wooden shoes never really made it to America.  The Native American were skilled at leather and furs, and the leather shoes were the standard for Americans for the next 300 years, that is until the Crocks. 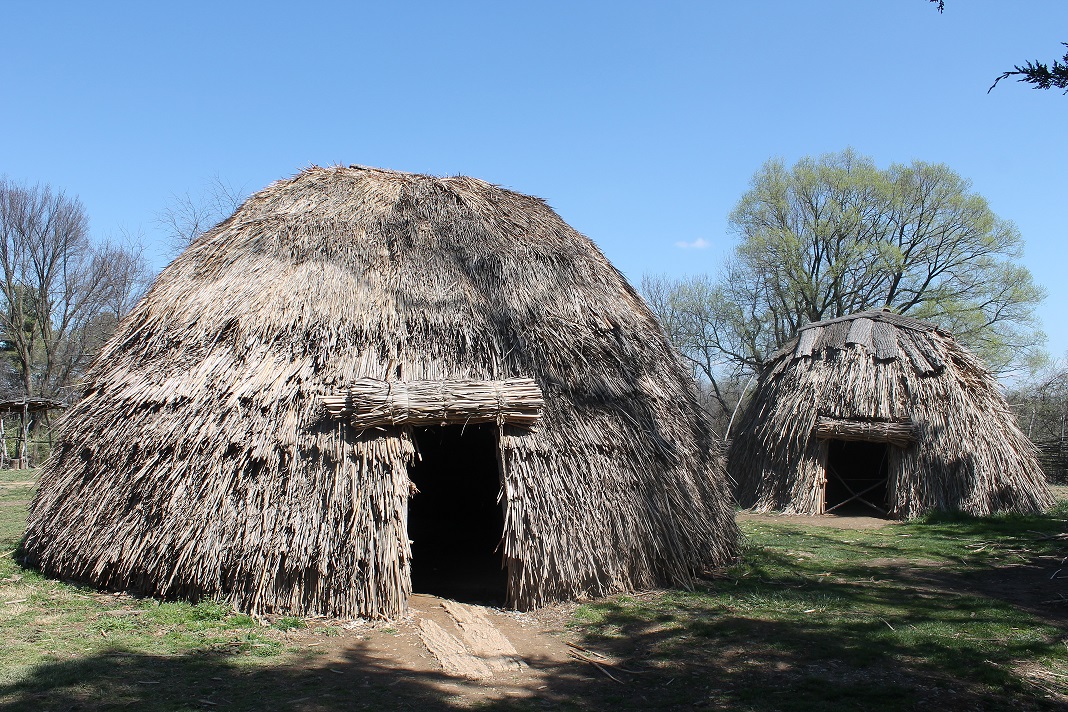 A Native American Wigwam.  Depending on the area, they would use tree bark, reeds and cattails, or in more western locations, the teepee used buffalo hides.  The Native Americans that were in this area are called the Monacans.  Long before the Appalachian Trail along the Blue Ridge Mountains, the Monacans were the master hikers and hunters of this area.  Arrowheads and stone tools can be found on mountain ridges and near streams, but try as I might, I have yet to find anything.