Monticello on the Fourth of July 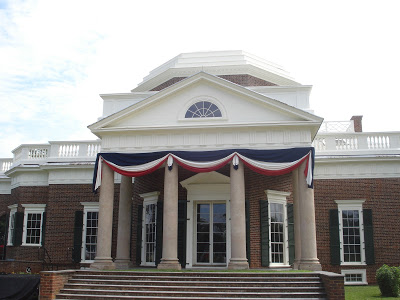 While for most people, a visit to Monticello takes you back about 200 years (239 years this year to be exact), a trip to Monticello takes me back about 20 years to when I worked there.  A few things have changed since then for me, but the house is largely the same.  The two big poplar trees are gone now.  I don’t doubt that they were old and getting unstable, but I rather liked them and they were the last of the trees from Jefferson’s time.  I will say that I recalled scrubbing the entire roof balustrades with TSP and bleach one summer mostly because of the sap and pollen from the Poplars covered it with a greenish brown layer.
I also noted a few minor changes, the entry doors were varnished mahogany outside, but have been painted white.  Perhaps more historic, but I think I liked the wood look.  They added a gift shop next to the stables.  I am hoping it is a temporary thing, though as I recall we used it for storing chairs back then.  It was once the wash room for clothes in Jefferson’s time.  I am not sure when, but I was sure that the stalls had two partitions inside them and they were removed as well.  But over all I would say it is far better shape than prior to the restoration work of the 1990s when the most of the exterior wood working was either replaced or removed and restored.  Hats off to the current crew for keeping up with the painting. 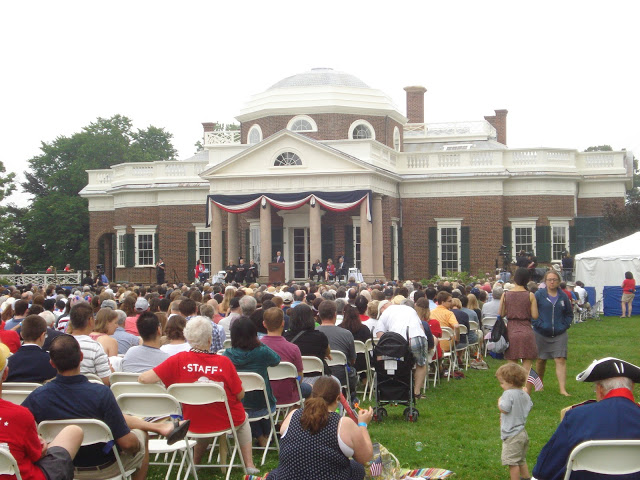 Every fourth of July, some new Americans are sworn in on the West Lawn of Monticello.  It is moving to hear some of the new citizens speak about their journey to become a citizen.  Jefferson has a great international appeal.  He is not just one of the founding fathers of our country, but the inspirational icon of nearly every democratic movement in the world from the French Revolution to the fall of Communism, Jefferson’s concept that the individual matters will continue to make his words live on for centuries.

One of the most interesting thing about working at Monticello was talking to some of the tourists that came from far away on a pilgrimage to see a man who has in some way inspired their life.  I was just a carpenter, not a tour guide, but would often get in conversations with people after their tour ended and they wandered the grounds, as if still hoping to see a glimpse of the man.  There are probably a dozen Jefferson related books written each year, and it is easy to find a bit of ones self in some aspect of Jefferson.  Each new president, regardless of political party, sites Jefferson, often misquoting out of context, but he is always there.  Portraits in the Oval office change each new election, but no one ever takes down Jefferson.  Even as his scandals revive centuries later, Jefferson still endures.  I mention all this at the picture of his garden because with some false humility, Jefferson often claimed himself a simple farmer.  He liked his garden and the nearby Mulberry row.  It was part of his concept of independence, the idea that he could grow his own food and make his own nails and build his own house.  He was however operating on a much larger scale than this pioneering concept of self sufficient living.  Jefferson was a CEO of a business that had over 200 people, mostly slaves.  He spent a tremendous amount on building Monticello, as president as well as taking on debts of other family members.  At the end of his life, the tobacco prices fell and like many people of his day, he died heavily in debt, only spared foreclosure during his lifetime due to his former role as president.

Jefferson’s early years of his marriage were spent here, in the 20×20 foot honeymoon cottage.  It was from here that he watched his grand house being built, started a family and wrote much of his political writing including the Declaration of Independence.  In this little one room house, big dreams for this country and his grand home were sketched out with pen and paper.  As you walk around the Fenton Inn, you will find some octagons and other design features I credit to Jefferson as well as the ability to dream a bit big as I drew up my plans for the Inn.  Thanks Mr Jefferson and Happy Fourth of July!